Our last major game was a refight of Torgau

This one was fought - as usual using the excellent King of the Battlefield rules - as a contest over 5 victory points - 4 fleches and a road junction.

The Austrians started holding all the victory points, but were unaware of where the Prussians could come from, whilst the Prussians had the task of seizing three or more of the VP points before night fell. 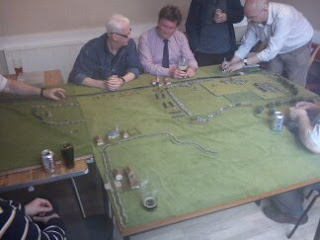 "There were 12 players in all, 7 Austrian and 5 Prussian. Five of the players had never used KotB rules before and four were still new to the rules. The game came to a conclusion in 3 hours and was enjoyed by everyone.

Torgau proved to be a good multiplayer scenario as the Austrians have a central position and are attacked from opposite sides of the table. This gets all the players involved. As the Prussian columns time of arrival on the table was randomized players could still join in even after the battle was in full swing, as not all players can get into the club for the 7pm start time. I had set five victory point objectives so that there would be a clear cut result at the end of the night.

So, how did the game go? Most of the Austrian players were unfamiliar with the battle so I allowed them some latitude in set up as they did not know where the Prussians were coming in from. This led to some Austrian commands not immediately marching to the Prussian attacks as they did not know if more columns would be marching onto the table in their sector. Given the nature of our big participation games on the first Tuesday of the month, with commands being handed out as people turn up and express an interest, there was not a rigid chain of command. If fact there was no chain of command at all that I could see!"

In true 18th Century style, no one agrees.

Night fell with combat still undecided. The Austrians held three of the five victory points, and were claiming victory, however, the Prussians were in a much stronger position to take these than the Austrians were to hold them, and the Austrian force had been split from its main line of retreat.

Conversly, that split was only held by a small number of Prussian Cavalry - which would not be able to hold them in the darkness, and the Austrians still had a viable bridge and alternate escape route to withdraw over.
Frederick required a decisive victory to end the war, while the Austrian command did not need to force a victory, as the numbers (and Russians) were on their side in the longer term.

Both sides claim victory, therefore, although the balance of casualties was significantly in the Prussians favour - unlike the historical engagement, which effectively ruined Fredericks army for the remainder of the war. He never sought out a major battle after it. 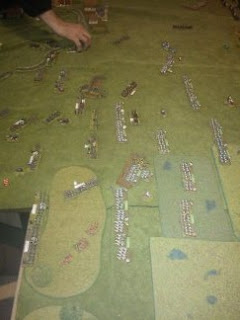 You can see some of the fighting here - notice the one fleche which has been taken from the flank by a Prussian regiment, and which suffered repeated charges by Austrian Hussars to retake it - without sucess.
Posted by Phoenix Wargamers at 06:38

Phoenix Wargamers
The Phoenix is a combined user for members of the Phoenix wargaming club in Glasgow, who play wargames. We blog on games we feel are worth sharing.